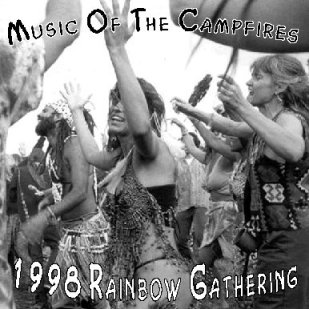 This is music from the "Music From The Campfires - 1998 Rainbow Gathering" CD compiled by Hawker from recordings made at the rainbow family gathering of the tribes that took place in Arizona for a time around the 4th of July, 1998 where people came together by many paths for a time becoming one in harmony celebrating love in spirit manifesting visions of peace and healing our mother earth.

These MP3 files come from Rob Savoye's collection on www.welcomehome.org. I have renamed the files to be more informative and consistent with the titles Hawker gave them. The CD cover art JPEG is also from Rob's page (though renamed by me). If you notice any mistakes with the song names or the meta-data (id3 tag) info on these files, or just want to drop me a line, please email me at morning42dew@yahoo.com.

Rob's notes say:
================
The only recordings I have from the Arizona gathering is from Hawker's CD "Music From The Campfires 1998". This was recorded on a portable DAT deck, with the batteries charged off photovoltaic panels. This page is a copy of the now down site where this mucis used to be.

Recorded at the 1998 National Rainbow Gathering of the Tribes, in Arizona.

Notes from the Hawker's Nest:
After years of wishing I could capture all of the wonderful music I was hearing at the Rainbow gatherings to bring home, I finally got myself together enough to start recording at the Arizona National gathering. Here is my first attempt. Even though I was learning a new art, struggling with new equipment, batteries and basically learning a new craft, this CD does manage to capture some wonderful performances. It isn't technically perfect, but it captures my heart. I am proud to offer it to you, my family as a gift of my love for Rainbow and the Music. To the many artists who let me record them, thank you! I'm sorry if I got the names of your songs wrong.


Teckie-notes:
This recording was made with a Shure VP-88 Mid-Side microphone and suspension mount, recorded directly into a Tascam DAP-1 portable DAT Deck at 48Khz. About 10 hours of DAT tapes were made and culled though to create these 72 minutes. The recordings were transferred into my computer via SPDIF and a Gina card. Sample rate was then converted to 44.1KHz from 48KHz. Levels were normalized, and some compression & limiting, when needed, was used in the process using Sound Forge 4.0e. No EQ or other processing was used. Compression to MP3 was done with the Telos/Fraunhofer codec in the standard encoding mode. This was my first year getting used to this equipment so these recordings were a learning experience to me. While they are not perfect technically I feel they do give some idea of the magic that can happen at the Rainbow campfires.

Song Information:
Here is a brief explanation of the songs included on the CD. To Play these songs you will need an MP3 player. If anyone can tell me more about the artists, songs, or correct me on a miss-titled song I would appreciate it. You may contact me by e-mail at hawker@ashevillecommunity.org.

Since I was very busy in 98, these songs are basically the sum total of three recording sessions.

1 Flute by the River
======================
This recording was made about 30 minuets before we broke silence on the Fourth. I was walking to Main Circle from Bliss and came across a brother sitting by the stream playing a PVC flute. The entire camp was silent waiting for high noon, so the flute could be heard reverberating throughout the camp, with the sound of the stream in the background. Unfortunately, my DAT deck's batteries failed suddenly which is why the piece fades off so quickly. The flute player's name is unknown at this time.

2 Standing in the Need of Prayer
==================================
Recordings # 2-4 were made at the small fire pit above and between Tea Time and Musical Veggie. There were about a half dozen musicians and about the same number of listeners there at the time. After a few songs, the musicians forgot about the microphone and magic happened. This recording is one of my favorites on the CD. Unfortunately, I do not know any of the musicians' names from this "session".

4 Southern Cross
==================
This of course is the Crosby, Stills & Nash Classic. Everyone joined in, and a good time was had by all. Musicians quiz --- what are they waiting for before they can start the song together?

7 Operator
============
This song is the classic, Operator. This and the next song are sung by Arjay Sutton, a frequent contributor to the Rainbow news-group. I've enjoyed Arjays music since I first met him, I think at the Missouri gathering. He has a way of belting it out and bringing us all into his music like few others I know. Get him going and he keeps playing and playing. I'm honored to have his music on this CD. If you see him however point out that Arjay needs cue cards... perhaps we need a bumper sticker.

10 Amsterdam
==============
This one captivated us all. By the time we realized what was coming, it was too late. We had been captivated by its spell. This was quite an amazing piece. Alan told me he felt good and wanted to get his best song into my recording. I'm so pleased to share it with ya. By the way if any of you see Alan would you please teach him how to pronounce gouda ("goo-dah").

12 Henry
==========
This song should need no introduction. The rest of these songs were recorded over two days at Lovin Ovens. I think with all the hype surrounding the Rainbow movie recorded at Aloha that year many of the musicians were looking for a new, lower key outlet. Lovin Ovens was that outlet this year. The Ovens are a great place to hang out at night. There were three main fire pits where we sang, drank coffee and ate fresh baked sticky buns, pizza, cookies and anything else that came out of those barrels the folks at the Ovens baked in. [Ed: Name corrected - this is an NRPS cover - md]

13 Jump for Joy
=================
Tommy and his crew just kept the music pouring all night, while the ovens kept our bellies full as well. Sailor's has his own first hand account of how Lovin' Ovens ended up with the best music, "....funny how that happened, we weren't getting anything from supply because Gypsy thought we did our own supply. Well we were down to 20# of flour, no food for the crew and about $20 in our hat. So we put up a sign down by info that said Ovens declaring bankruptcy -- to close tomorrow. Tommy saw it and thought it was hilarious, said he'd come with a few friends and the shake the can for us. They were really hot, had the joint rocking, took in over $200 the first night."

14 White Buffalo
==================
After a few songs two sisters came out of nowhere and took us all by storm. They sang for about an hour, spellbinding us, and giving us these next two songs. I know not their names. I think one was named Maria, then again, maybe I'm wrong. I understand that they were both from Hawaii. Their music was wonderful however.

16 Coming in from the Cold
============================
The music at Lovin Ovens was especially enjoyable. The range of instruments, musicians and music folks brought to the place was amazing. You can clearly hear the double bass one brother dragged up that hill to 9000 to entertain us all. What a night!

17 I Don't Want to Wait In Vain
=================================
Nothing better than listening to good musicians play together. While this song was playing a "tourist" asked me the name of the band. She didn't believe it was just friends jamming together. I used to like taking the media to The Ovens during the day. It would blow them away to get out in the woods and find this. As one journalist made it to the top of The Ovens, her eyes widened in amazement as she exclaimed "They're baking up here".

18 Dire Wolf
==============
Why stop a good thing. The music just kept playing the band that night. We all just sat there clapping, dancing, singing along and going along for the ride. [Ed: Name corrected - this is a Grateful Dead cover - md]

The rainbow family of living light is said to be made up of tribes and families and people from all walks coming home together as one human family gathering together on the land. A rainbow gathering is different for every one. You may find people actively creating postive commuity with one another, learning and teaching ways we can live in harmony with nature, our mother earth, and each other. And celebrating life together. There is no formal organization or leadership. It is felt by many to be contrary to the spirit of the gatherings. It is said that any one with a belly button may consider themselves part of the rainbow family, and that even a belly button is not really needed. We are welcome home as one family.

There have been gatherings called Rainbow Gatherings since at least 1972, and there has been at least one large gathering of the tribes every year in the US on public land around the 4th of July since then. Many gather then to pray for peace and healing in the world. There are also gatherings in many parts of the world, in different countries and continents, and even world gatherings. There are many local and regional gatherings throughout the year. Some are timed with solstice or equinox or other special times and seasons. It may be that there have been gatherings before or since the "first" rainbow gathering in 1972 that may not have called themselves rainbow gatherings but were of the same spirit. The gatherings are called rainbow because they are for all the peoples of the earth, from many families, tribes, and nations. Some say that the Hopi people native to North America tell a vision of a time when mother earth, the land, air, waters, and creatures of all kinds were sick with poisons and ill treatment by people, the children of the white races, or more specifically the people who lived the cultures of those who displaced the native peoples of the Americas - not just caucasions) would grow their hair long, wear beads, and come together with the children of all the nations to heal the earth. Intentional community, respect for indigenous peoples and culture, ecology, and spirituality are common themes with peoples of the rainbow.